So, as I mentioned yesterday, I made some homemade alcohol inks.  I THOUGHT these were going to be amazing, and then I did a bunch of testing and thought they were a  complete failure, but then I did some more testing and decided maybe I have a place for them in my art after all.  And since living with a 5th grade boy makes me think and speak like a 5th grade boy, I sum up the experiment this way: 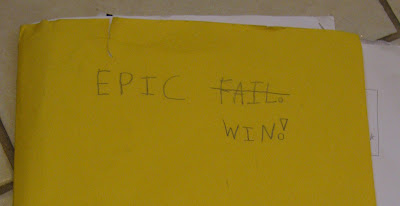 I first heard mention of this in a facebook group a few weeks ago and put it on my list of things I should look into.  Then I read about it again on TJ's blog and decided to actually do it. So I found this video on You-Tube (which I watched just enough of to get the basic idea of how to do it and then turned it off.  given my mixed results, maybe I should have watched the whole video and followed it up with her part 2 instructions)

It was quick and easy (and smelly and a little messy) and the colors were VIBRANT! 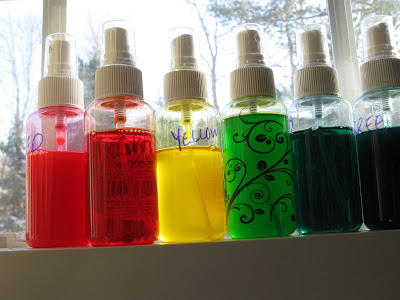 So then I set about testing them on a bunch of different surfaces.  I took a file folder and attached various papers and tapes and started spraying.  TOTAL DISAPPOINTMENT.  The colors were muted - some almost non-existent.  And the SMELL.  Man-oh-man it smelled like a hospital ward.  For hours. (Oddly the cat was fascinated by this and hovered near the smelly papers all afternoon).

Here are the results of my experiments: 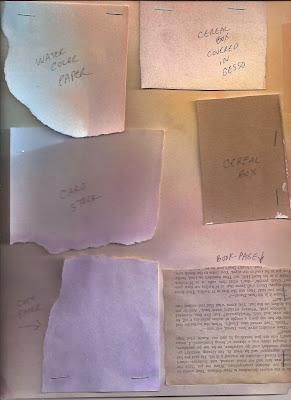 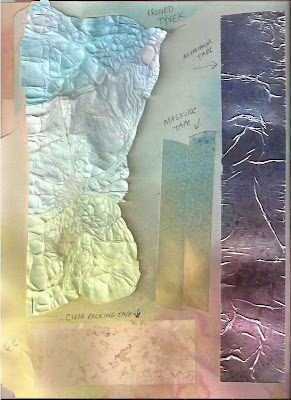 I called it a day at this point and nearly dumped them down the drain in disappointment.
But I took up the cause again this morning and had better results.  I noticed that the colors were most vibrant on bright white, smooth, not-too-absorbant paper, so I started there. 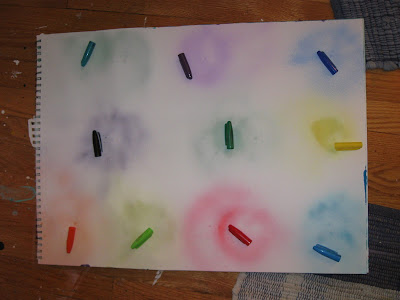 I tried it with some stencils on cheap copy paper.  Not bad: 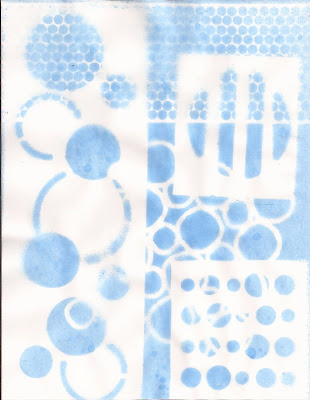 Then I tried yellow, orange and red in a cheap sketchbook and filled it up with notes on what I'd learned. 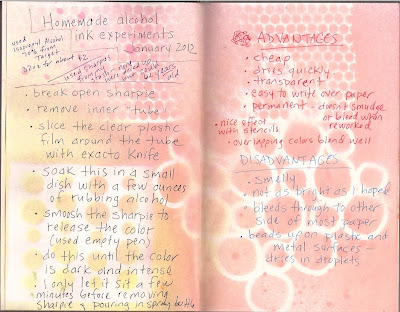 Disadvantages:
smelly
colors are muted
bleeds through to the other side of most papers
beads up on plastic and metal surfaces.  it dries and leaves the color in little droplets
did I mention smelly? 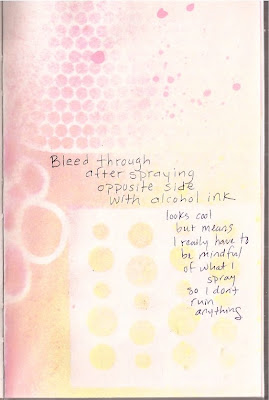 Final assessment:  not what I'd hoped for, but if I can tolerate the smell I will use it to create some interesting background effects.

If any of you have experience with homemade inks leave me a comment.
Posted by Karen Isaacson at 10:50 AM

New comments are not allowed.

Art swaps for everyone

Want to see my postcards?